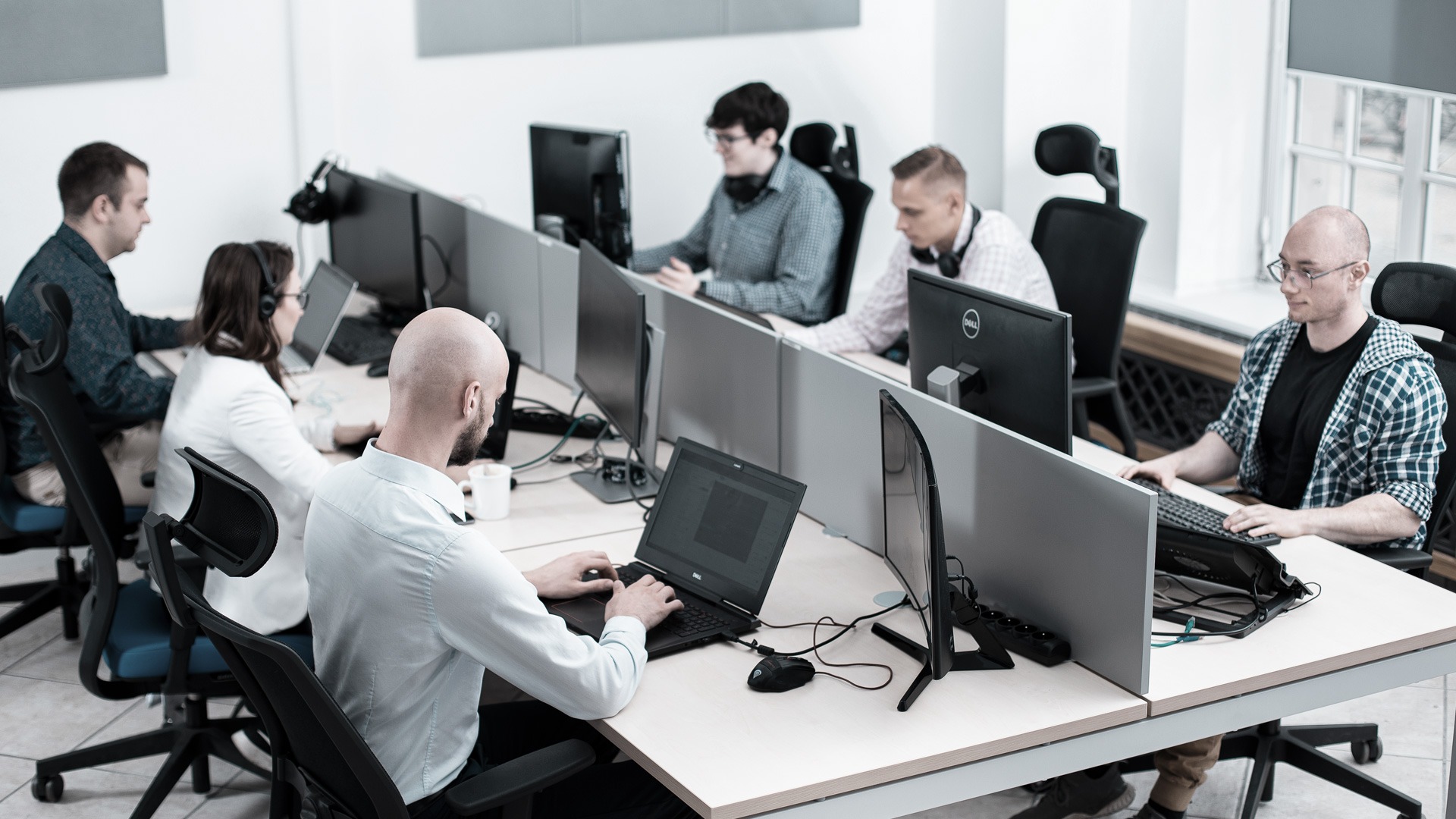 .NET Core vs. .NET Framework - Which is a Better Choice for Your Next App?

With the evolution of the .NET platform, entrepreneurs and startups looking to build a new application may be confused about whether they should choose between .NET Core vs. .NET Framework variants. This choice depends largely on the operating system the new application will target, but there are several other factors to consider before making the final decision.

In this article, we explain the difference between the .NET Core and the .NET Framework - the two variants of the .NET platform and everything you need to know to make the right decision when picking between these two. In particular, we look at:

Let’s start with a quick overview of the .NET platform and its components. 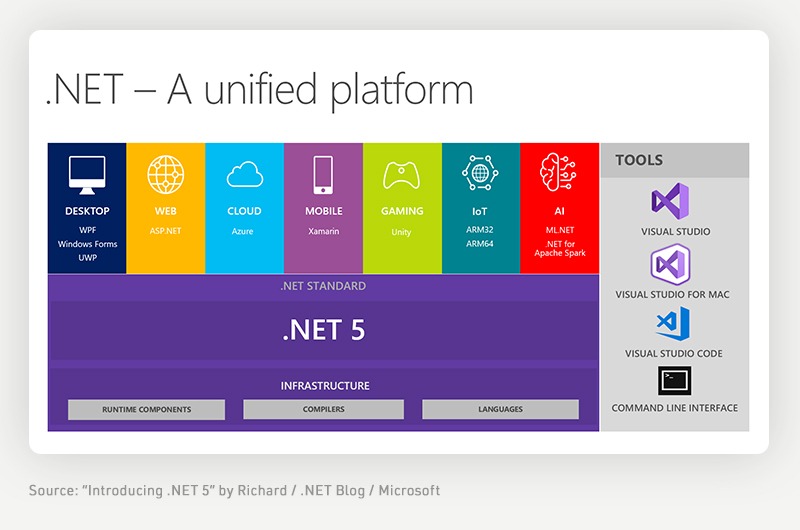 With the latest release of .NET 5, Microsoft unified the names of the individual components of their development framework, born almost two decades ago.

Back in 2002, Microsoft released the first version of the .NET Framework. It offered one application building platform serviced by most programming languages, including C#, F#, and Visual Basic. The platform was created to run exclusively on Windows and offers convenient features like a common API set, language independence, and interoperability with the underlying operating system.

While the introduction of .NET Core was a much-needed step, it further complicated the library portability for developers. For that reason, Microsoft introduced the .NET Standard - a formal specification of .NET APIs (there is a specific .NET Standard version for every .NET implementation).

Finally, to eliminate further confusion, Microsoft released .NET 5 in November 2020, aiming to unify all of its components under a single platform. It offers a common set of APIs that run on Windows, Linux, Mac, iOS, and Android. That doesn’t mean however that .NET Framework and .NET Core will cease to exist. .NET Framework will not receive further updates, but Microsoft will continue to support it.

Both .NET Core and .NET Framework maintain a vast user base. The 2020 Stack Overflow survey indicated that both .NET Framework and .NET Core continue to be among the leading software development platforms for various applications.

What do these programming frameworks have in common? Both can share codes and many components upon request, making them convenient to use. Developers can use .NET Framework and .NET Core runtimes to build applications and libraries in C#, F#, and VB.NET.

At the same time, there are significant differences between .NET Core and .NET Framework that must be considered before choosing a .NET development framework for your next project. Take a look at the table below for a quick overview:

As a system, .NET Core is installed differently, it's not part of the OS. .NET Core is composed of NuGet packages and is either compiled directly into an application or placed in a folder inside the app. .NET Core is all about decoupling the system from Windows to allow apps to run side by side on the machine.

The release of .NET Core gave businesses greater flexibility in terms of adding resources to servers and expanding the infrastructure, allowing them to easily support more users quickly when needed. These points explain why .NET Core is the second most popular development framework, right after Node.JS. There is no other platform on the market, however, that offers as much flexibility and portability as .NET Core.

In addition, .NET Core is more cost-effective. It offers more choice for IDEs and other tools required for developing this technology: you have multiple hosting options, freedom to switch to Linux or other providers, unlimited database storage options. Even if costs aren't the issue in your project, it's better to have the additional financial capacity.

When to use .NET Core?

.NET Core, the 'younger brother' of the .NET Framework, was created to address specific needs that the primary .NET Framework didn't offer. These include:

There was a growing need in the software development community for a cross-platform solution, so Microsoft had to respond accordingly by releasing .NET Core. The platform can use Windows, macOS and Linux, and other platforms as development workstations, giving developers the flexibility of creating applications that can run on multiple operating systems. Microsoft continues to expand the list of supported platforms. Developers can use the command line on every platform on that list and benefit from Visual Studio when using Windows and macOS (in a limited capacity). There’s also the cross-platform Visual Studio Code which supports Windows, Linux, and macOS.

.NET Core is designed to support a service-oriented architecture or software applications composed of small, modular business services. Each of these services typically runs a unique process created in different programming applications and is deployed independently. This is a great feature that allows owners to scale their tools by adding new microservices whenever needed. .NET Core also allows to mix development technologies and can be minimized for each microservice.

Microservices usually come along with docker containers. .NET Core works very well with this type of architecture because it’s lightweight and modular. It also enables cross-platform deployment straight to dockers. You can also use the .NET Framework for containers, but the image size will be significantly larger.

.NET Core offers CLI control across all supported platforms, which is particularly attractive for developers who prefer to work in lightweight editors with the CLI function. In addition, .NET requires minimum installation on development platforms and offers the option of switching to an Integrated Development Environment (e.g. Visual Studio IDE) for an added convenience.

Microsoft recommends using .NET Core with ASP.NET Core when you have long-term plans for your tool and anticipate a scale-up. This combination offers the best performance and an opportunity to scale easily. It allows developers to implement hundreds of microservices, using a lower number of servers and virtual machines. This efficiency translates into a better user experience and significant cost savings.

.NET Core is the only option when installing applications with dependencies on different versions of the .NET development framework. The advantage is that with .NET Core, these are run on the same server, with multiple services running simultaneously.

When not to use .NET Core?

When to choose .NET Framework?

Windows comes with the .NET Framework. Its principal role is to build Windows desktop apps and large-scale enterprise applications. It uses .NET workflow and data connection tools and can use Docker and Windows Containers.

You should choose .NET Framework over .NET Core in the following cases:

Learn more: Why do we love .NET at CSHARK?

When not to use .NET Framework

There are several scenarios in which .NET Framework is not the best choice for your next digital tool. Opt for .NET Core specifically when:

.NET Core vs. .NET Framework - which should you choose?

.NET Framework will be a better choice when:

In turn, .NET Core is a better choice if: 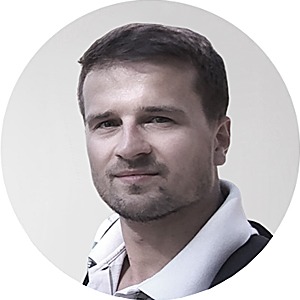 Paweł Łukasiewicz
Senior .NET Developer / Blogger. On a daily basis, focused on cloud development. In my spare time, I am writing articles on various technology topics touching full-stack development lifecycle.
When .NET Framework is the Best Choice for Application Development and Why?
Krzysiek Szymczyk’s Career Change: From Military Service to IT
Table of content:
Would you like to discuss the challenges in your project on this topic?
Let's talk
CSHARK uses cookies on this site to improve performance, for analytics and for advertising. By browsing this site you are agreeing to this. For more information see our Privacy and Cookie policy.