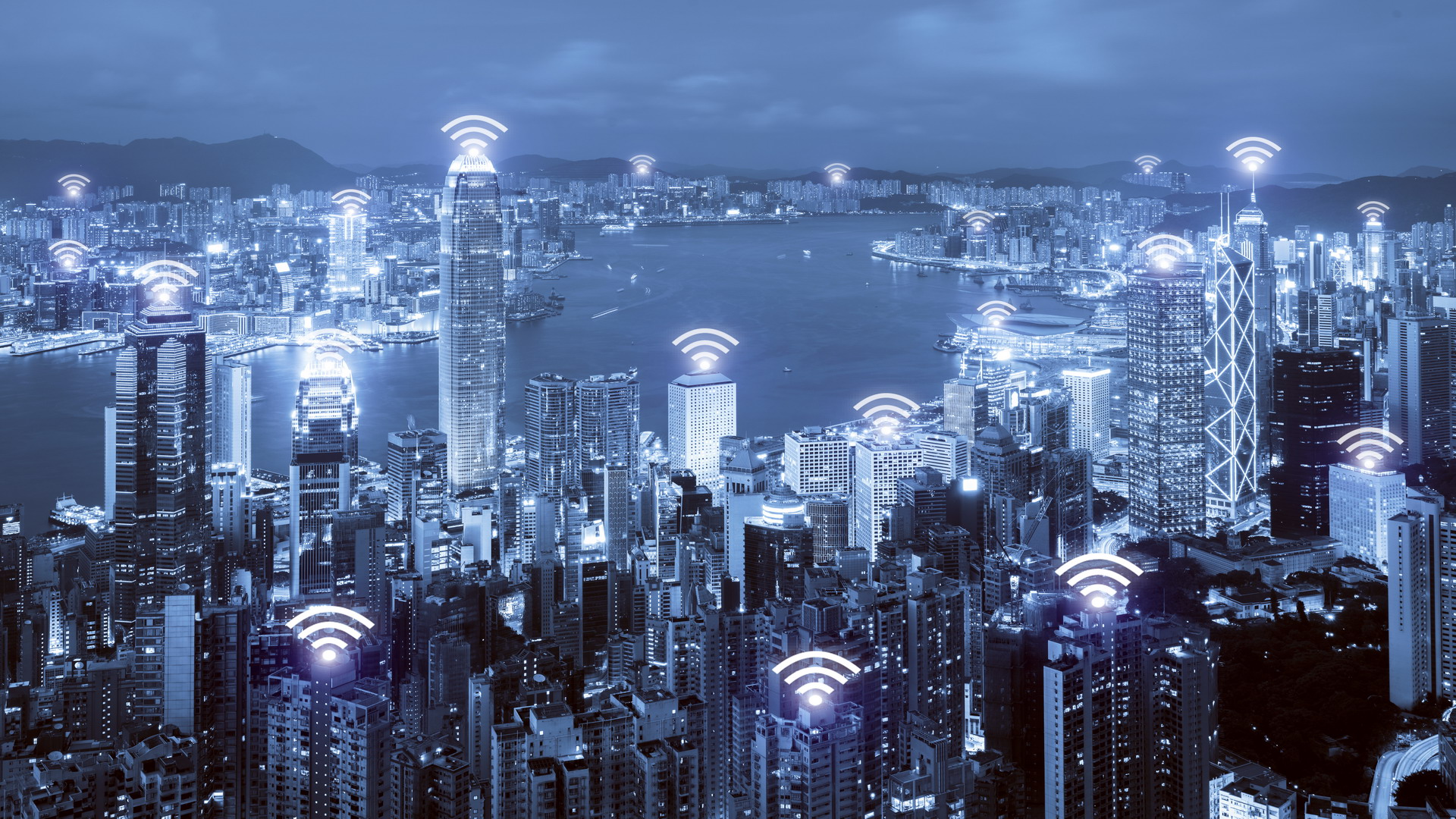 A guy walks into a bar – he checks the weather on his watch, pays for a drink with a smartphone, leaves behind a flexible newspaper on a counter. Finally, he vanishes into the night to watch a game with his friends; they swap comments while using a mobile internet connection to browse through past game scores. They live in a smart city - go to work, pay taxes, have hospital operations performed by the doctors half the globe away. That was the smart city that invests in Internet of Things.

Internet of Things (IoT) is a network that consists of hundreds, sometimes even thousands of various devices – smartphones, wristbands, beacons, sensors, industrial machinery and so on, that connect and speak to each other. The concept in undergoing a change through which it will base on the 5G network. The goal is to provide a service that extends beyond the usual use of not only the internet but devices as well. A bunch of cities and countries already have invested in this technology, including Singapore, Barcelona, Louisville in Kentucky and UK.

Your city can be the next one on the list, since CSHARK has not only experts on the Internet of Things, but has also, through a software product development, created a tool that can be leveraged on multiple levels. For example, it can be used to build your own IoT solution. CSHARK offers a rapid software development platform as a backbone ready to be covered with your specific needs. Built on the architecture of microservices, it utilizes a technical backbone as an entry point from which you can have functionalities specific for the nature of your business.

Benefits of Internet of Things networks in a smart city are measurable:

Think about firefighters that can utilize a building’s layout on-the-go or police that can improve a cameras’ usage by enabling them only when they approach and interact with a citizen or pull a gun. Autonomous vehicles will also be more efficient. On the other hand, MIT found that New York City traffic could be cut down by 75% by the culture of car sharing.

That’s not all. A white paper from Accenture called ‘Smart Cities’ states that solutions applied to the management of traffic lights and electrical grids alone can produce $160 billion in savings by reducing energy usage, traffic congestion and fuel burnout. As explained by Jefferson Wang, managing director at Accenture Strategy, ‘5G has the ability to help cities do more with the same amount of budget.’ It’s all based on data. As IDC points out in their Worldwide Internet of Things 2019 report, 45% of the video surveillance content will be used to provide context to data from IoT endpoints in public safety scenarios and in transportation hub and campus monitoring.

This metrics alone shows how cities will change and in what areas. IDC’ report for 2018 shows that by the end of 2020, close to 50% of new IoT applications built by enterprises will leverage an IoT platform that offers outcome-focused functionality based on comprehensive analytics capabilities.

Meaning cities will turn into big data grinders that swallow data and spit solutions. None of that is achievable without a proof of concept (PoC). It gives organizations (and cities alike) possibility to optimize technology and master the backbone before the mass adoption on a local level. Say one block instead of the whole city? This makes sense since research by Cisco says that 60% of IoT implementations stall at the PoC stage, with 26% of businesses considering their IoT plans to be a success.

And yet, smart city isn’t exactly a new concept. Back in a day, when there wasn’t an Internet of Things to talk about, interesting ideas had emerged. One could argue that an idea of a smart city was created in 1900s, back in a day when traffic lights were introduced to the public. Nowadays we struggle with crime and pollution, therefore ambitions should go higher than mere lights. It doesn’t have to be spectacular like flying police cars, tracking crime with data pulled out of street-level cameras. It could take a form of an already existing contactless cards in London’s Underground, a small thing, yet practical and valued by inhabitants. And now the spectacular, yet not-fully-finished example. Songdo in South Korea was developed as a smart city and built from the ground up. Although construction is not complete, the city already hosts 100,000 residents. The challenge? Make it as organic as possible (in terms of culture, natural social development and so on) with a ‘smart’ adjective at the other part of the scale and that suggests an intelligent design. Problem? Clash. As Jonathan Thorpe, a CIO for the developer Game International explains for the BBC:

It's the occupants who make a city. You're trying to create a diversity and a vitality that organic development creates, in and of itself, so it's a challenge to try and replicate that in a masterplan setting. At the same time, with a masterplan you have the ability to size the infrastructure to make sure the city works - now and in 50 years' time. And that’s where 5G comes into place. 5G is one of the keys to smart city development. Connecting communities all over the city requires an advanced ecosystem for the flow, processing and analytics of data in seconds, sometimes even real-time. 5G brings power and system architecture to make it happen. What cities and countries benefited?

Let’s look at it locally. In 2015 AT&T invested more than $700 million in Kentucky to upgrade both wired and wireless networks. With bumped up 4G LTE network, Louisville was one of the first 12 cities in the US to receive mobile 5G from the company. In early 2019 Las Vegas, Los Angeles, Nashville, Orlando, San Diego, San Francisco and San Jose will follow. The company will continue its spree to expand the service after launching in these cities. In UK it’s expected that 5G network will become available in 16 cities in 2019 alone; that includes Glasgow, Liverpool and Hull with launch cities being London, Cardiff, Belfast, Edinburgh, Birmingham and Manchester. AT&T is not the only vendor going 5G in the United States. Verizon tested nearly a dozen cities in 2018, including Sacramento.

The previously mentioned report by Accenture suggest that smart technology and 5G in a small city with a population of around 30,000 could have $10 million impacts on the power grid and transportation systems. A larger city housing 118,000 could see $70 million. A major city like New York could witness an impact of $5 billion. This clearly shows real-life potential and value. What these numbers don’t show, however, is the life-and-death situations that can be managed by the development of a 5G network. Remote surgeries that rely on very low latency can also benefit. Sending heavy CAT scans or X-rays from experts from the other side of the world and then turn observed symptoms into lasting medical effects cost bandwidth, 5G solves that problem.

Let’s also remember that China already work on 6G. 5G’s large bandwidth, low latency and wide connectivity can be toppled with the unrivalled speed. For now, smart cities adopt Internet of Things slowly but steadily. 6G on the other hand, can leave the structure of both wired and wireless networks on their heads. Cities can benefit by relying on data, processing power and the ability to deploy software solutions.

And speaking of solutions, as previously stated, CSHARK has finished the work on our own platform that is highly scalable, easy to use and ready for a total personalization for different business needs. It’s not 6G-ready, but it’s developed for 5G, which is currently entering the scene. Having a product designed for something fresh out of the box is in accordance with CSHARK’s tagline – expect more. It works for smart cities and our company alike. Radosław Szmit
Former VP Business Operations at CSHARK. Business development and consultant expert with numerous years of experience in IT. Management and business coach, project manager and vision monger.
6 Advantages of FinTech Applications in Finance
.NET 7 Guide – What’s New in .NET?
Table of contents:
Would you like to discuss the challenges in your project on this topic?
Let's talk